There are some exciting things happening in the world of windows, and they could prevent you from ever having to buy curtains, drapes or blinds again. Recently, a team of scientists figured out unique a way to turn windows from transparent to opaque within a matter of about just 30 seconds. If they’re able to sell window companies on the idea of incorporating the technology into their products, it could alter the way we use windows forever.

The scientists, who work at Stanford University, heard about a technology that was used aboard the Boeing 787 Dreamliner which allowed people to press a button and turn their windows from clear to a very dark blue color in a matter of minutes. After studying the technology, they decided to take things a step further and improve upon it by creating a different process to darken windows. 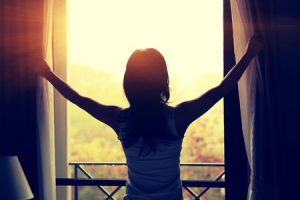 The Dreamliner designers relied on expensive materials like tungsten oxide and a thin layer of gel to change the opacity of the plane’s windows, according to Science Alert. But the Stanford researchers figured out a way to use copper, an electrical current and a window made of transparent indium tin oxide instead. When they ran a current through the window, it turned it from clear to opaque in under a minute and blocked out 95 percent of light. Then, by removing the current, the window went back to being clear again. The scientists cycled through this process more than 5,000 times and found that they were able to make the window go from clear to opaque and back again no signs of degradation.

Someday, this technology could not only eliminate the need for window coverings, but also help cut heating and cooling costs as well. Opacity-switching glass may not be ready to go to market just yet, but it has tons of potential in the future.